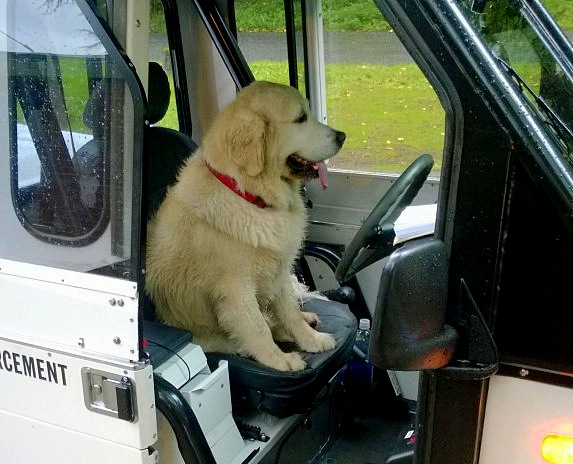 SEATTLE — Not many people are fans of the so-called meter maids that putter around town in their scooters, doling out parking tickets. And it seems that one dog thought it would have its day, if not its say, when it hopped in one of the scooters Tuesday. (We guess that’s what you get for leaving your scooter unattended.)

Seattle police said they released the canine from custody after he commandeered the scooter to escape from a storm.

The dog had taken a seat in parking enforcement officer Stan Estaban’s scooter after Estaban finished his rounds in the Leschi neighborhood. When Estaban walked back to his scooter, the shaggy dog ducked in out of the storm, and onto Estaban’s lap.

Estaban tried to shoo the dog out of the scooter, but it wouldn’t budge. A group of people in the neighborhood told Estaban they had seen the dog trailing them earlier, and that the dog seemed to be quite frightened by the storm.

The dog didn’t have any tags, so Estaban called Animal Control and turned the heat up in his scooter to keep it comfortable. And in a sign of a canine-friendly solidarity, another officer dropped by with some biscuits.

Animal Control officers collected the dog and reunited him with his owner on Wednesday.