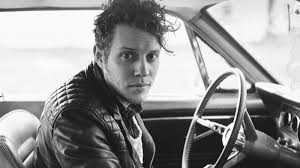 On a rainy afternoon, Anderson East leaves his tour bus, crosses the slippery cobblestone street, and slips into a vintage guitar shop in Seattle’s historical district. He doesn’t draw any attention to himself as he wanders around — he looks like any other tousled-haired, sleepy-eyed basement player — but his gaze is intent as he eyes the weathered axes hanging on the store’s walls.

“Anderson East’s Alabama-bred, soul-stirring sound is a far cry from the booming twang of Music Row”

He eventually edges into a side room to scope out the stage he’s about to set upon and makes himself known to a small flock of fans gathered for a one-off acoustic performance.

He seems shy, or maybe he’s just a tad weary, as he settles in and launches into “Devil in Me.” He sings a raspy, soulful dirge about the age-old conflict of good and evil (she’s an angel, he’s got a bit of the devil in him), but his voice calls up ghosts of a bygone era — a bit of Southern folk, battered barroom soul and a plaintive gospel wail that sucks you right into swirling, swampy waters.

These seemingly disparate elements all come together when you trace East’s background. His heels might be hitting the curbs of Nashville these days, but his Alabama-bred soul-stirring sound is as far away from the booming twang of Music Row as you can get.

The 27-year-old singer/songwriter, whose given name is Michael Cameron Anderson, grew up in a place where most had a bible tucked into their belts, or at least stuffed in the glove box (his grandfather was a preacher, his father performed in the church choir, and East’s first audience was a congregation), and his distinct Southern soul is a wicked stew of blues and gospel, praise and damnation. It’s also what makes Delilah, his major-label debut and fifth release, such a joy.

Recorded at Fame Studios in Muscle Shoals, Alabama, the sonic history of the room bleeds into East’s every song.

“The smell of the place — it’s just in the walls — there’s some kind of spirit there. Those rooms were built so perfectly,” he says.

“We don’t ever really care about what’s going on or what anybody else is doing, we’re just trying to go out and have fun every night”

From the salty lessons of a ne’er do well father that there’s just never, ever, any such thing as enough in “Satisfy Me,” to the funky, liquid bass that infuses his cover of George Jackson’s “Find ‘Em, Fool ‘Em and Forget ‘Em,” and the fat, sexy horns and shooby doo of “Delilah,” East sounds not only far removed from his current Nashville environs, but also this century. In fact, he would make Wilson Pickett damn proud with his rough, roadhouse vocals and hip-thrusting grooves. But East also knows the power of a caress and tries on a little tenderness for the forlorn “What a Woman Wants to Hear” and “Lonely.”

It’s curious that such a throwback as East would find a safe haven in Nashville, but Dave Cobb, the city’s current go-to producer, not only twiddled the knobs for East’s album, he was the reason East was propelled from the indie fringe to the majors when Cobb signed him to his Low Country imprint. The leap makes sense because Cobb is notorious for his authenticity and East’s music carries an undeniable honesty — and every track on the album proves it.

“If you’re trying to be delicate with a song, with production or something like that, you’re just making art out of a fearful place,” East says. “The things I love are just wild and wrong and flawed. I think that’s where the beauty of it is.”

Cobb met East when he was performing at Nashville’s infamous Bluebird Cafe; the two met up afterward and, well, one thing led to another. Seems simple enough, but keep in mind that East had been knocking around Nashville since he dropped his debut album, Closing Credits for a Fire in 2009 — under the distinct name of Mike Anderson, no less.

While country music stars grab headlines (one of them, Miranda Lambert, has been by East’s side of late), East seems more inclined to embrace the city’s musicality rather than its spotlight.

“Nashville, from the outside, seems pretty one-sided, but it’s actually a pretty diverse landscape,” he says. “We don’t ever really care about what’s going on or what anybody else is doing, we’re just trying to go out and have fun every night.”

Fun is right. Later that evening, East and his crew, a collective of longtime buddies/roomies, take to the Tractor Tavern’s stage. The stage barely exceeds that of his previous performance, but now there’s plenty of cold brews being passed around, the audience is also imbibing and the sweat is dripping off the walls, probably not unlike the juice that summons the spirits at Fame.

East is loose, there’s a lopsided, charming toothy grin pasted on his face and it’s infectious — the entire room is goading him on and smiling along with him. It’s no surprise he’s got a friend in town — he strikes you as the kind of guy who has a far-flung network — and Brandi Carlile hops up on stage and the two do a version of Sam Cooke’s “Bring It on Home to Me” that doesn’t bring you to your knees like the original, but instead knocks you on your ass.

It doesn’t stop there — the two go on to slay The Faces’ “Stay With Me” and segue into Bowie’s “Rebel Rebel.” By the end of the set, East — sweating, smiling and with a firm grip on his cold, longneck beer — throws his arms out to embrace the audience and launches into “Satisfy Me.” As he pleads for “more, more, more,” it seems as if he’s found satisfaction — for now.